A Creak from Down Below

Sheree turned her head toward the basement door, then she looked back to the family room where her parents were; her dad staring blankly at the television as if he was under hypnosis, and her mom reading one of those magazines that only older women and gay men read. Maybe it’s just the house, she thought. Old houses always make noises for no reason, right?

Hmm, she thought. Maybe it’s Brendon.
Getting a wicked look on her face, she went closer to the door... closer, almost there now. She reached for the doorknob and turned it. The iron door hinges creaked with a shrilling sound, causing her dad to momentarily flinch but not enough to break him out of the trance that was holding him hostage to the television set. Her mother on the other hand probably didn’t even hear it, too absorbed in some article about creating an inexpensive duvet cover out of two flat sheets, or embroidering monograms on napkins or something absurd like that. Or maybe it was the three glasses of red wine with dinner she swallowed down like a fish that altered her sensory reactions. Entering the basement, she searched for the light switch, looking furiously to locate it. There didn’t seem to be one as she felt over the walls on either side of the door. There has to be a switch somewhere, she said to herself, frustrated. Deciding that the light from the hall was good enough, she took a precautious step down the stairway that led to the dark, unwelcoming, musty room below the house.

Total darkness.
Terrified, Sheree became panic-stricken from the darkness in the horrifying subterranean chamber and reached for the doorknob, turning it but it wouldn’t turn. Trying again with a little more force, thinking that it was just old and maybe rusted, hoping it would budge if she put a little strength into it.
Still nothing.
It was pitch black, not even a sliver of light from between the bottom of the door and the floor, as if it had been sealed. Turning her head from side to side and carefully behind her in hopes that she would find a source of light somewhere, but not daring to move her feet for fear that she would stumble down the stairs.
Tumble.
Break her neck.
Die.
Or worse, become paralyzed. There was nothing but desolate blackness surrounding her. The air seemed to be getting heavy like she was going to pass out, so she banged her hands on the door over and over.
“Help!” she cried, breathing ferociously. “Let me out!”
The door burst open, intense light pouring in and washing everything out momentarily. Shielding her eyes with her arm, she looked down, and there on the ground, Sheree saw her little brother laughing hysterically, holding his stomach from the pain.
That’s it! I can’t take it any longer. He’s going to pay big time!
Staring at Brendon for a moment she decided that he wasn’t worth it. Although she felt like beating the crap out of him, she instead gave him a light kick to his side then stormed up the steps to her bedroom, hot tears starting to slide down her cheeks. It was the only somewhat private place in the house (though she wished it had a lock) she could be that didn’t give her the creeps or scare her. Barely audible from top of the stairway she heard her father tell Brendon to stop laughing because he was watching a very important TV show about some war and he’d understand when he got older how important it was for him to watch it.
How could he do that to me? He knows that I can’t stand being locked up in a dark room, especially not after...
Once again, she pushed the angst toward her brother aside, bottling it up. After she got into her room, she slammed the door shut and turned the stereo on, raising the volume loud enough for the whole house to hear clearly. She turned it down soon after, knowing that she would get in trouble from her dad if he couldn’t hear the TV show about some war that she was far too young to understand the importance of. She decided to dig out her old headphones so she could listen to it as loud as she wanted. Placing the headphones on and letting out a loud breath, she drifted off into her own little world, escaping all of her problems. 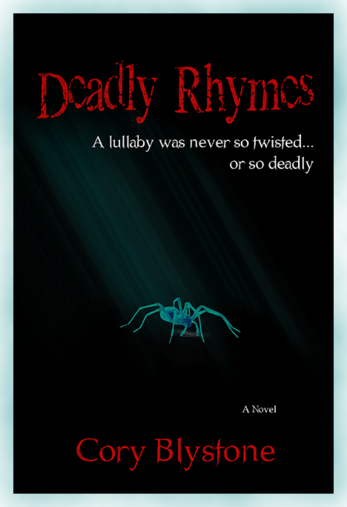 
After the Hollins family moved into an old house on Song’s End in the little town of Ravenwood, Washington, Sheree thought the hectic life she had in Seattle would finally be behind her. She was wrong.  At first she didn’t want to believe that their house was haunted, however the first night she heard a small child singing a creepy rendition of a children’s lullaby quickly changed her mind.

So twisted.
So evil.
So deadly.

Is there any way she can rid her life of the ghost determined to haunt her, or is she doomed to suffer until she too falls victim to its wrath?